Government has extended mandatory FASTag deadline to December 15. Note that earlier, December 1 was set as the date to make toll payments via FASTag mandatory at national as well as state highways. However, the date has been pushed to December 15 now.

“To facilitate sufficient lead time to citizens to obtain FASTag, it has now been decided that all the lanes in the Fee plazas shall be declared as ‘FASTag lane of Fee Plaza’ by December 15, 2019,” a Ministry of Road Transport and Highways communication said.

To give a push to digital payments and bring in enhanced transparency, the ministry had directed to declare all lanes of fee plazas on national highways as ‘FASTag lanes’ by December 1. However, one lane in each direction was decided to be kept as ‘hybrid lane’ which will accept FASTag and other modes of payment.

It may be noted that the government on Wednesday said over 70 lakh FASTags have been issued so far and saw the highest per-day sales at 1,35,583 tags.

The National Electronic Toll Collection (NETC) programme, the flagship initiative of the Ministry of Road Transport and Highways, has been implemented on a pan-India basis in order to remove bottlenecks and ensure seamless movement of traffic and collection of user fee as per the notified rates, using passive radio frequency identification (RFID) technology.

FASTag is an electronic toll collection method which involves affixing an RFID (radio frequency identification) tag which is affixed on the windscreen of the vehicle. The tag, which is rechargeable in nature, is linked to a prepaid account from which the charges are automatically deducted at toll booths. 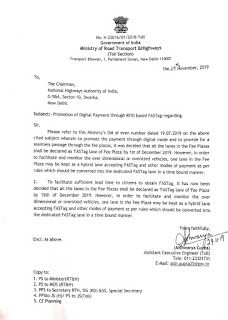 Bank-specific FASTags can be purchased from 22 issuer banks like ICICI, HDFC, etc whereas the bank-neutral FASTags will be available at several NHAI POS (points of sale), RTOs (regional transport office), transport hubs, several petrol pumps, and even through Amazon. It is worth mentioning that if you are intending to delay buying a FASTag and instead use cash at toll plazas, then be prepared to shell twice the toll charge as a penalty.

FASTags can be recharged using UPI, MY FASTag app, net banking, Paytm, etc. Apart from this, users can also link these tags to their bank accounts which will negate the need to recharge any e-wallet for using FASTags….Read more>>